Posted on February 5, 2015 by Margaret Dornaus 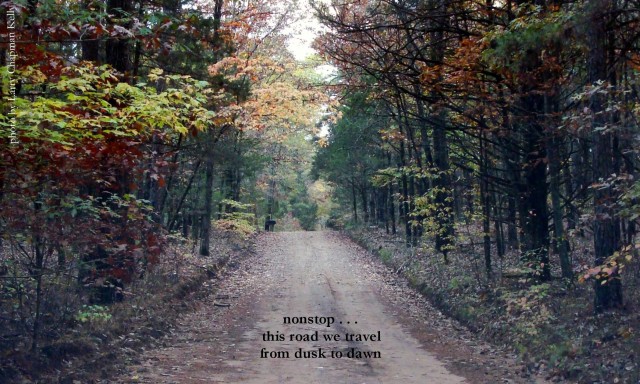 National Haiku Writing Month (NaHaiWriMo) is in full gear, and, happily, I am joining old friends and new in the effort to produce one haiku per day for the shortest month of the year. This is the fourth year I’ve participated in this Facebook brainchild of haiku guru Michael Dylan Welch, who provides a different word prompt each day for inspiration. (Day 5’s word is “nonstop.”)

This year I’m using the exercise to explore haiku that honor my late husband. (The photo of the road that leads to our house was taken by Larry in November 2013, a year before his death.)

I’m a writer and a teacher, as well as a haiku-doodler. I live in a beautiful woodland setting, surrounded by native oak forests, that inspires me to record haiku snapshots of luna moths and our resident roadrunner, and even an occasional black bear as it hightails it across the top of my road, my mongrel dog barking at its heels as I watch with wonder. My work as a travel writer has appeared in publications from The Dallas Morning News to the Robb Report. You can find examples of my travel writing–as well as excerpts from a travel memoir I’m working on–at my other WordPress site, Travelin’ On. What more than that do you need to know? Only that I started this blog with an eye toward collaboration. Got a haiku? Send it my way. . . . I’m all about new visions & voices. Best, Margaret
View all posts by Margaret Dornaus →
This entry was posted in Haiga, Haiku, Haiku-doodle, Larry Chapman Kelly, Michael Dylan Welch, NaHaiWriMo and tagged Family, Haiga, Haiku, Larry Kelly, NaHaiWriMo. Bookmark the permalink.